To share your memory on the wall of Opal Butcher, sign in using one of the following options:

To send flowers to the family or plant a tree in memory of Opal Butcher (Newsome), please visit our Heartfelt Sympathies Store.

We encourage you to share your most beloved memories of Opal here, so that the family and other loved ones can always see it. You can upload cherished photographs, or share your favorite stories, and can even comment on those shared by others.

The Family of Velma Arrowood, Love, BJ, Tracy, Bella, and Caroline Van Meter, and other have sent flowers to the family of Opal Butcher (Newsome).
Show you care by sending flowers

Medium Dish Garden was purchased for the family of Opal Butcher. Send Flowers

The Family of Velma Arrowood

Posted Apr 28, 2021 at 09:07am
In memory of a wonderful friend and sister in Christ to our beloved Nan. Our prayers and love to you all.

The Family of Velma Arrowood purchased flowers for the family of Opal Butcher. Send Flowers

Posted Apr 27, 2021 at 08:50pm
Our deepest sympathy to the Butcher family. We're thinking of you all in this difficult time.

Posted Apr 27, 2021 at 07:40pm
With fond memories of Aunt Opal from the many visits with my mom and dad over the years as I was growing up. Your Kansas cousin. Marylee Butcher Guy
Comment Share
Share via:
JH 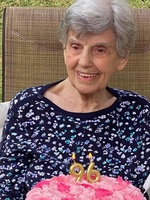