To share your memory on the wall of Frank Daniels, sign in using one of the following options:

Frank is survived by his loving family that meant everything in the world to him. Fran, his wife of 62 years, was the love of his life from the day he met her. They were best friends and inseparable. Together they raised two children; Frank (Julie) Daniel of Logan and daughter Kimberly (Paul) Callahan of Galena. The epitome of loving father, we never celebrated a holiday without him announcing “I don’t want any presents, I just want my family together”.

Frank proudly served four honorable years in the United States Army and was incredibly proud to be a Veteran. While serving, Frank met his two best friends, one would eventually become his loving brother-in-law, Earl (Phyllis) Sneed and the other would remain a life-long, loving best friend, Tom (Debbie) Frey.

Frank is also survived by numerous cousins, nieces and nephews, great-nieces, great-nephews and countless dear friends that were always in his heart.

Frank was a member of the Ebenezer Baptist church in Logan where he had many
wonderful friends.

Frank shared his deep love of sports with his son, grandsons, granddaughters and great-grandsons. He coached his son’s baseball teams in Madison Township for many years. He made some wonderful friends and coached many other young players which he referred to as “my boys”.

He never missed a ballgame or school event. He even got to see his great-grandson, James, play his first season of baseball with a huge smile on his face the entire game.

We wish to thank the amazing souls at Fairhope Pickering House in Lancaster for their incredible compassion and care. We are eternally grateful.

Frank had an amazing soul and was incredibly kind to everyone he met. Our world will never be the same without him but we are comforted in knowing that he is forever in the arms of God.

Visitation is scheduled at Oliver Cheek Funeral Home in Asheville, OH from 2 P.M. until 4 P.M. and then from 6 P.M. until 8 P.M. on Sunday. Funeral Services are scheduled for 11 A.M. Monday January 25, 2021 at the Ebenezer Baptist Church in Logan with Steve Hubbard officiating. Interment to follow in the Shaw Cemetery in Logan, OH.
Read Less

To send flowers to the family or plant a tree in memory of Frank Daniels, please visit our Heartfelt Sympathies Store.

We encourage you to share your most beloved memories of Frank here, so that the family and other loved ones can always see it. You can upload cherished photographs, or share your favorite stories, and can even comment on those shared by others. 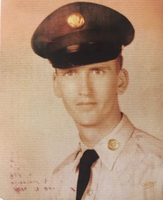