To share your memory on the wall of Gail Fannin, sign in using one of the following options:

Print
Gail Price Fannin, loving wife, mom, and gram, entered the gates of Heaven at the age of 68 on
January 15, 2021 in Birmingham, Alabama.

Gail was born on June 2, 1952 in Paintsville, Kentucky to Garner and Marie Price. Gail married<... Read More
Gail Price Fannin, loving wife, mom, and gram, entered the gates of Heaven at the age of 68 on
January 15, 2021 in Birmingham, Alabama.

Gail was born on June 2, 1952 in Paintsville, Kentucky to Garner and Marie Price. Gail married
her husband, Daniel Fannin, on August 14, 1971 in Paintsville and raised her two children,
Melissa and Mark here as well.

Gail often said that her greatest accomplishment was raising two intelligent children who are
saved and who are good people, contributing to society. For most of her life, Gail was a
homemaker. She enjoyed cooking for her family, decorating her home, and providing a
comfortable, loving environment for her people.

Gail is now reunited with her mother and father, her brother, Dan Burgess, and her Yorkie,
Charlie. She is survived by her husband, Daniel, her brother and sister in law Wayne and
Debbie Price, her two children, Melissa Sergent and Mark Fannin, daughter in law Kim Fannin,
and by her grandchildren, Alex and Rachel Sergent and Emma and Addison Fannin.
Read Less

To send flowers to the family or plant a tree in memory of Gail Fannin (Price), please visit our Heartfelt Sympathies Store.

We encourage you to share your most beloved memories of Gail here, so that the family and other loved ones can always see it. You can upload cherished photographs, or share your favorite stories, and can even comment on those shared by others.

Posted Jan 22, 2021 at 01:59pm
With all our love and prayers. Your friends at First Free Will Baptist Church Glasgow Ky

Sweet Tranquility Basket was purchased for the family of Gail Fannin. Send Flowers

Sentiments of Serenity Spray was purchased for the family of Gail Fannin. Send Flowers 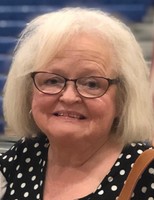