To share your memory on the wall of James Roger Vanhoose, sign in using one of the following options:

To send flowers to the family or plant a tree in memory of James Roger Vanhoose, please visit our Heartfelt Sympathies Store.

We encourage you to share your most beloved memories of James Roger here, so that the family and other loved ones can always see it. You can upload cherished photographs, or share your favorite stories, and can even comment on those shared by others.

Posted Sep 25, 2020 at 08:47pm
Roger was needing a new roof, so Bruce Garvin and I left work with him at lunch. We put plastic on the roof before the storm hit. Roger was on the corner and I reached over to pull the plastic down from the top and when I did I fell off the roof!! I was ok so they got me up and we went inside the house Tina delicious meal. I loved Roger and visited him a few years ago. My name is Larry “Plug” Moore. He was a wonderful Christian man. God bless his family. Prayers for all.
Comment Share
Share via: 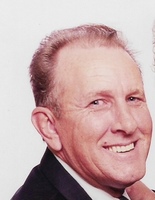