To share your memory on the wall of Dorothy Limburg, sign in using one of the following options:

To send flowers to the family or plant a tree in memory of Dorothy Sturgill Limburg (Ward), please visit our Heartfelt Sympathies Store.

We encourage you to share your most beloved memories of Dorothy here, so that the family and other loved ones can always see it. You can upload cherished photographs, or share your favorite stories, and can even comment on those shared by others.

Posted Apr 29, 2020 at 07:52pm
I remember going down to Kentucky in the summer spending a few days there swimming in the pool her delicious sweet tea. Always happy , always smiling. I had my first taste of pizza for breakfast cold left over from the day before and it was delicious. R.I.P aunt Dorothy.
Comment Share
Share via: 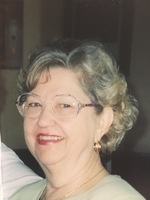