To share your memory on the wall of Phyllis Ward, sign in using one of the following options:

To send flowers to the family or plant a tree in memory of Phyllis Christine ""Chris"" Ward (Fannin), please visit our Heartfelt Sympathies Store.

We encourage you to share your most beloved memories of Phyllis here, so that the family and other loved ones can always see it. You can upload cherished photographs, or share your favorite stories, and can even comment on those shared by others.

NPR of America, INC, Lisa Ratliff Bowen and Family, and other have sent flowers to the family of Phyllis Christine ""Chris"" Ward (Fannin).
Show you care by sending flowers

Posted Oct 09, 2019 at 01:06am
heaven has certainly gained one of the most beautiful, loving caring angel god has ever put on earth, I loved you dearly momma and I am going to miss you so much, you have always been there for me and was good to me, and for that I am truly blessed to have called you mom! until we meet again my beautiful momma, RIP! LOVE YOUR DAUGHTER VICKIE
Comment Share
Share via:
LF

Posted Oct 08, 2019 at 07:42pm
One of the kindest ladies I had the pleasure of knowing. Your loved one will be missed. Hugs and love to all of you.

Posted Oct 08, 2019 at 04:07pm
My deepest sympathy to the family .... my heart hurts for all of you....she loved the Lord, her family and friends and nature... she was a very big help to me in my younger years.... she was a angel here on earth and now she has her angel wings.... she is rejoicing now.... she will be missed.... prayers for the family as they go through this difficult time 🙏🏻 Theresa Walker
Comment Share
Share via: 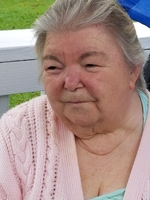